Implementation of Curriculum at Ks3 and Ks4

In Key Stage 3, the History Curriculum is created to give students a balance of social, political, military and … history. The students are introduced to the importance of History in understanding our world, our locality and ourselves.

In Year 8, students will investigate the role that Britain played in the slave trade. We will also explore how slavery developed in America and the ending of slavery in Britain and America. Students will then decide whether the British Empire was a force for good or bad. Students will explore actions in India, China, Ireland and Australia; whilst being aware of the vast array of countries and the impact of the Empire. This topic naturally helps students in our study of the Industrial Revolution, where students evaluate the living conditions in major cities such as London, Liverpool and Portsmouth. Students will specifically investigate how the Industrial Revolution changed Portsmouth. We will learn about how women gained the vote in 1918 and explore the impact of the Suffragettes, Suffragists and women during World War I. Our penultimate topic in Year 8 is World War I, students will investigate the conditions, type of warfare, tactics, key battles and the home front. The final topic of Year 8 is America in the 1920s. Students will evaluate the reasons for economic growth and collapse, the impact of prohibition, what the KKK were in the 1920s and the treatment of Communists.

In Year 9, students will start of by learning about Russia between 1900-1939. This is for the purpose of fully understanding the principles of Communism and the reality. This will lead into the causes and events of World War II. Students will investigate the main reason for the start of World War II, they will also try to assess the main turning point in World War II and assess how much life for citizens changed as a result of war. Students will then assess how the Holocaust was able to happen and judge how the treatment of Jewish people changed in the 1930s and early 1940s. This will be followed by students learning about when "World War III" seemed most likely by exploring events of the Cold War. There is a key focus upon the Korean War and Vietnam War. 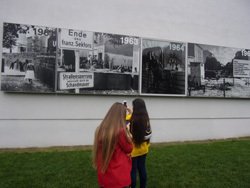 At Key Stage 4, as part of Paper 1, the course takes us across 1,500 years of history with the History of Crime and Punishment. In Paper 2, we look in depth at British history when we examine Early Elizabethan England 1558-1588 and international history where we explore the Superpower Relations 1941-1991. We also examine Germany from 1918-1939 in Paper 3. The course is very challenging and academic however pupils are supported by a strong department and fortnightly revision sessions in Year 11 and drop-in sessions in Year 10.

Year 10 recreating Pentonville Prison during their study of crime and punishment.